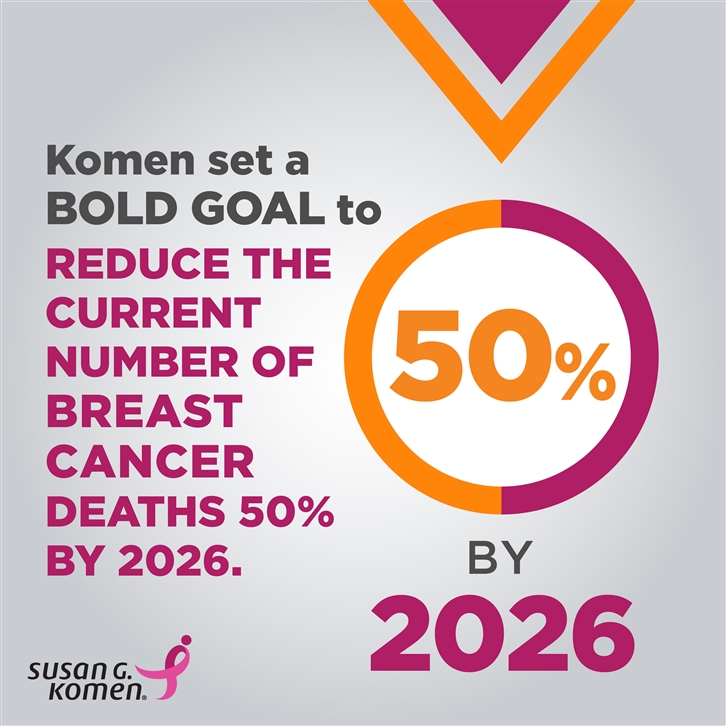 SUSAN G. KOMEN ANNOUNCES $26 MILLION INVESTMENT IN NEW RESEARCH TO FIND SOLUTIONS FOR AGGRESSIVE AND METASTATIC BREAST CANCERS, AND TO HELP COMMUNITIES MOST AT RISK

DALLAS – Sept. 25, 2018 – Susan G. Komen®, the world’s leading breast cancer organization, today announced an additional investment of nearly $26 million to fund 62 new research projects that seek to answer some of the toughest questions facing breast cancer. This new funding is part of the organization’s efforts to reduce the number of breast cancer deaths in the U.S. by 50 percent by 2026 and brings its total research investment to $988 million to date – the largest nonprofit investment outside the U.S. government

The grants include $449,252 in new funding for research at one institution in Illinois, bringing Komen’s total research investment in Illinois to $20,590,057 since 1982.

“This year, Komen is investing in a number of areas that will help us achieve our bold goal and save lives. We are seeking answers to why our current drugs work for some patients, but not all, or why they work at first, but later become ineffective.” said Komen Chief Scientific Advisor, George Sledge, M.D., Chief of Oncology at Stanford University Department of Medicine. “We are also looking into aggressive forms of the disease like triple negative and inflammatory breast cancer, which tend to have poorer outcomes. By investigating novel techniques and therapies, we hope to bring new treatment options to patients.”

The newly announced grants will investigate critical areas in breast cancer research, including (but not limited to) projects focused on one or more of the following:

This year, Komen’s competitive grant program for young investigators was entirely focused on drug resistance and metastatic disease. “Komen continues its long-standing investment in the next generation of scientists, to ensure that brilliant researchers whose careers are just beginning have funding to pursue their novel ideas,” said Komen Chief Scientific Advisor, Jennifer Pietenpol, Ph.D., Executive Vice President for Research and Director of the Vanderbilt-Ingram Cancer Center at Vanderbilt University Medical Center. “We are proud that this investment includes opportunities for 23 innovative and inspired researchers to lead the way in making breast cancer discoveries that will improve care for all and help save lives.”

“More than 41,000 women and men will lose their lives to breast cancer this year alone. I lost my mother to the disease a few years back, and I myself have been treated for aggressive triple negative breast cancer. The idea that it could impact my daughters is unacceptable,” said Komen President and CEO Paula Schneider. “We all have a personal reason or passion that we support the fight against breast cancer, and we’re proud to invite people to support the work that means the most to them. It will take all of us working together to save lives and ultimately end this disease.”

Komen’s research program is funded in part by contributions from Komen’s nationwide Network of Affiliates, which directs a portion of funds raised locally to 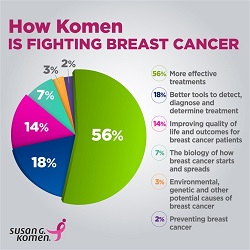 “We are so thankful for the friends, family and neighbors that fight alongside us, helping to reduce the number of breast cancer deaths in Illinois, both on the ground and through research,” said Linda Maricle, Executive Director, Susan G. Komen Memorial Affiliate.

In Illinois, Komen is granting to the following researcher:

Xia Liu, Ph.D., from Northwestern University Feinberg School of Medicine, will receive $449,252 to determine if targeting neutrophils, the most abundant immune cell in the body, can treat metastatic breast cancer. Preliminary studies indicate that neutrophils can help the tumor spread through an enzyme called Alox5. The goal of this study is to determine if drugs that target Alox5 can limit the spread of breast cancer.

Research has been a cornerstone of Komen’s work since opening its doors in 1982. Komen also works to inspire action through advocacy and public policy, to mobilize communities through support services and opportunities to make a local impact, and provide the care that patients need (including screening, diagnostics, treatment and navigation).

About Susan G. Komen®
Susan G. Komen is the world’s largest breast cancer organization, funding more breast cancer research than any other nonprofit outside of the federal government while providing real-time help to those facing the disease. Komen has set a Bold Goal to reduce the current number of breast cancer deaths by 50 percent in the U.S. by 2026. Since its founding in 1982, Komen has funded more than $988 million in research and provided more than $2.2 billion in funding to screening, education, treatment and psychosocial support programs serving millions of people in more than 60 countries worldwide. Komen was founded by Nancy G. Brinker, who promised her sister, Susan G. Komen, that she would end the disease that claimed Suzy’s life. That promise has become Komen’s promise to all people facing breast cancer. Visit komen.org or call 1-877 GO KOMEN. Connect with us on social at ww5.komen.org/social.

Grants are contingent upon signed and executed contracts with Komen.